How it went down~

Keep reading for the details… 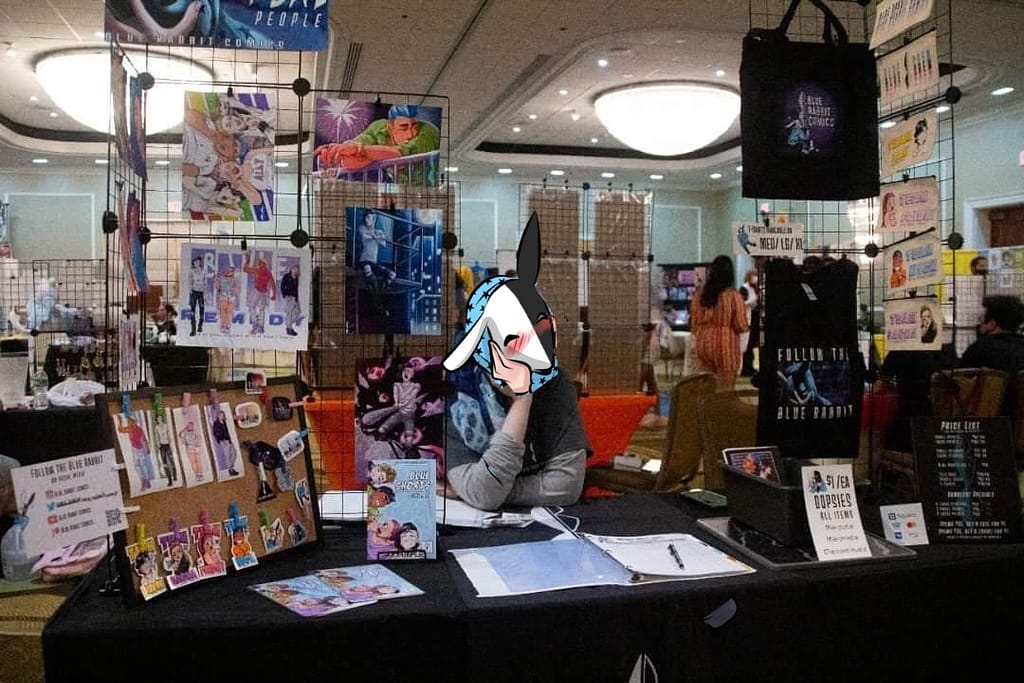 So as everyone here probably already knows- I do original work.  All of my free time goes into working on my web comic and the supporting materials for it (illustrations, a printed comic, etc etc…).  I walked into a fan based con fully well knowing that fanart is what people come to artist alley for.  But you know what? I didn’t do too bad!  I left the con $3 short of paying for my table, which is, in my opinion, a WILD success!  At least, in the setting I was in.  If I went to an original art/ original comics type convention and didn’t make my table I’d probably feel pretty shit.

My most purchased item was my comic book, which was what I expected (I only had ONE left at the end!!!).  I sold a few stickers and two copies of one of my Patreon only prints- oh, and one tote too!  I was really tickled :^).  I wasn’t worried about moving my products because I have two more conventions coming up soon, so I knew I’d be able to roll it over.  I didn’t mark down anything on the last day because, to be honest, I already have my items as cheap as I can sell them without taking a loss. I make everything myself at home, so I have a lot of things to consider when I price my items- not just the cost of having someone make it for me.

I did a lot of research before going into the convention, trying to find out how to manage an all original works inventory at a fan based con.  I didn’t find any information, to be honest… so here’s some for the next person:

You can absolutely sell your own work at a fan con.  Will you make bank? Probably not. Not in my limited experience. But I did almost break even, and the “press” was worth it.

The overall vibes at Puchicon of the customers and the vendors were certainly positive and inclusive.  I was worried about fitting in, which…I mean, I didn’t really *fit in* since the only fandom I am in is my own (lol?)…but it was an inclusive atmosphere where I didn’t feel left out for not being a weeb.  There were only a few visitors that I reeled in to my table (yes, I was fishing hard, hollering at everyone who made the mistake of looking in my direction) who were completely uninterested and didn’t want to listen to my spiel.  Most of them, even if they were just being polite, took a handout about my comic and said they’d check it out.  Hey, even if they don’t, they were polite and nice to me and I can’t ask for more.

There was a small subset of people that I met who were definitely picking up what I was putting down, and we had a solid creative connection.  Those folks signed up for my newsletter (mostly), asked thoughtful questions, told me about their own experiences as creatives, crafters, musicians, etc, and we had a very nice conversation.  It is always really cool to meet like minded people!  A handful of my visitors already knew my comic!!!! Imagine, I was sobbing internally.

The other vendors I spoke to were very kind and thoughtful!  There were many who already knew each other from previous conventions, but since this was my first one I didn’t know anyone.  They were very welcoming and talkative, giving me lots of advice and support.  Many of them came and supported my table, saying that they do original work too but don’t bring it to cons/ don’t have a lot of it in inventory because they are hesitant with the tiny audience that original art is attractive to.  I totally understand their hesitance, and if I had time I might do fanart too…but I don’t enjoy it- and as I tell anyone who asks, I have zero intention of making profit off my story…I’m just trying to break even, so I am not chained to the customers whims.

So…I had low expectations for the administration of this convention.  I looked up some reviews about previous Puchicon conventions, and there were complaints about poor organization, little to no help, etc.  Since this was my first convention I had nothing to compare it to… but, it was fine.  They told me where my table was, and that was about it.  I didn’t interact with the staff members much in a vendor/staff capacity.  I did hear the staff members ask other vendors how they were doing and if they needed anything…but they didn’t ask me, so, I can’t say anything about that.  But I had my table, I had my chairs, the room was locked overnight and when I arrived on Sunday it was still locked.  I asked if they could open it and the hotel folks came and did so quickly.  So, if you are self sufficient you’d be fine at a Puchicon convention.  If you need hand holding and whatnot, maybe not a good choice.  Other vendors told me this was the most organized they’d ever been, and it was still not at the caliber of other conventions.  I guess I’ll find out when I go to the next two events.

No shade to the staff, they were polite.

What I’d do differently

I think my table setup was cute, and I liked how it was clear and concise as far as what I had to offer.  I am not a fan of super crowded displays.  BUT, next time, I plan to have individual price cards to put near the items to compliment the full price list.  I think it was too hard for people to know at a glance what was for sale, how much it was, etc.

Also, I think I’ll make a sign that I take commissions.  I don’t think that was clear enough with just the commission section of my folder.  The folder mostly stayed open to the newsletter page.

What’s next for Blue Rabbit Comics?

While tabling at a con is very challenging and tiring (especially when you’re hawking your own stuff and have to be super alert to grab every single person you can), I am very glad I went and I plan to do more conventions in the future (besides the ones I already signed up for).  There is something special about connecting with people on a more personal level face-to-face, and IRL marketing is harder for them to escape from (buahaha).  I haven’t checked my stats on my platforms yet, but I am hoping that my web comic will get a readership boost from this!

Will I table at Puchicon again?  Probably not.  I don’t think so.  While it was a great experience to go to a convention, I wouldn’t say Puchicon is exactly my vibe.  It was very much fan based, fandoms/anime style.  I had no idea who half the cosplayers were, and most of the visitors were there for fanart. A few of them didn’t care for comics/ web comics at all (who doesn’t like web comics????)… I think that conventions that focus more on original works and stories, comic books, etc, will be a better fit for me going forward.  Additionally, I think the cost of the table wasn’t worth it since I barely broke even.  The cost x the general audience = not a good fit for BRC.

Oh yeah, and if you show up to one of the cons I’m at cosplaying as one of my characters, I’ll give you a free “teams” sticker for the character you cosplay ;^)  but you have to come up to me and tell me!!! :^D 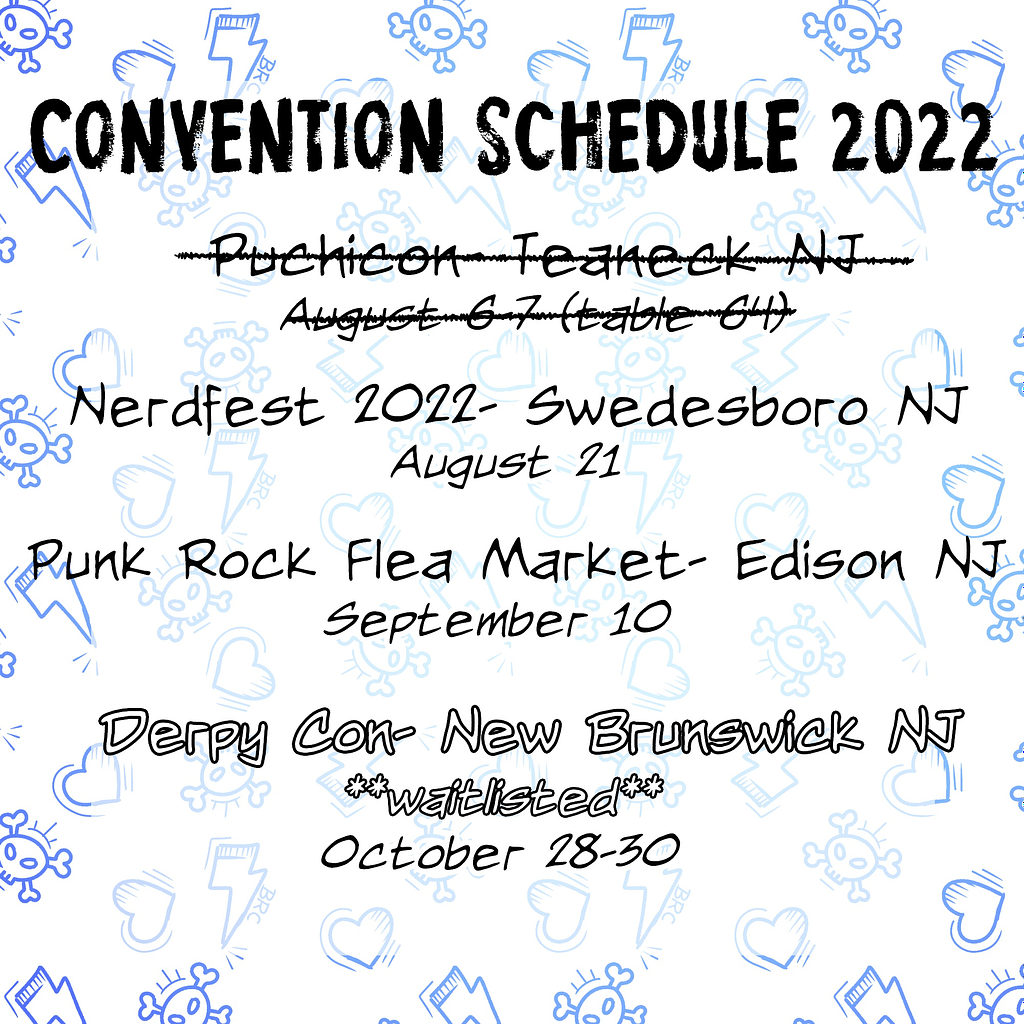