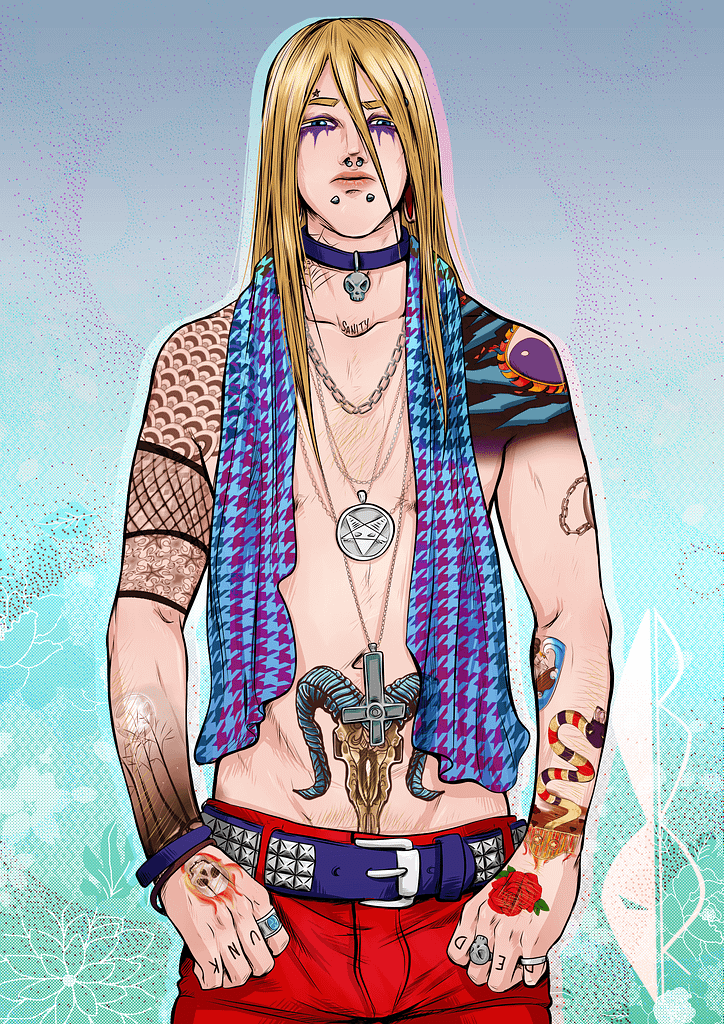 Nothing says spring like a heavily tattooed punk with flowers behind him- right? Right?

Honestly, I was just inspired by the video “I’m not a vampire” by Falling in Reverse- I wanted to draw the outfit Ronnie Radke was wearing on Sacha!! Then I figured I needed some bright/spring- themed pictures for my wall and new prints…so I slapped some flowers on the back and said “yeah that works”.  I mean, do we really need a reason for a shirtless Sacha? Do we? I think not. 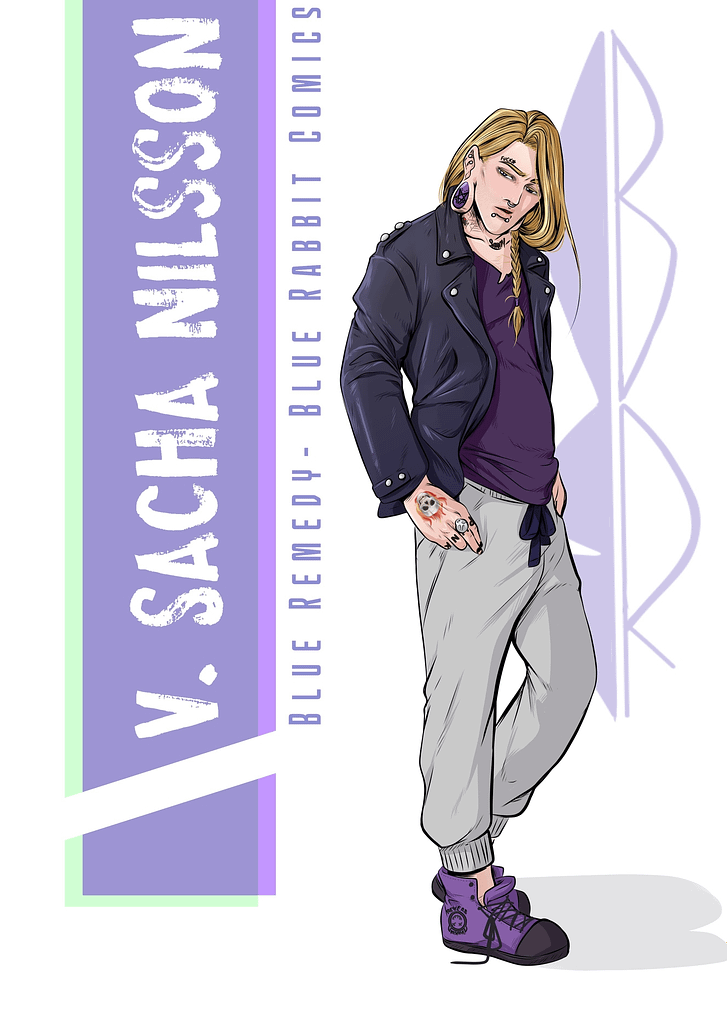 Sacha started as a secondary (maybe even tertiary) character for one scene…and now he has taken over my heart.  Ok, he’s taken over my heart AND a big chunk of the story :’^) oops.  See, I should have known better than to formulate a character as a mix of my partner and my brother – that was asking for trouble.   I am trying not to put any spoilers, but you may want to stop here if you are really ANTI spoiler…just in case ;^)

Get to know Sacha, one of the main characters from Blue Remedy!

Place of Birth: The Seventh Borough (a bougie suburb of The City)

Childhood:  Sacha was raised side by side with his twin sister Victoria in the bougie Seventh Borough.  He attended a private boarding school along side his sister in Nutmeg City (approx 2.5hr from The City) from K-12 .  After graduation, he went to The City University for programming, where he completed his education and obtained a BS in Computer Science.  Although his sister is only older by a minute, he always took her lead growing up- getting into trouble right along side her.   His parents, while very loving and constantly doting on their miracle babies (they were the result of invitro fertility treatments when natural conception wasn’t working for them), were not very present in the twins lives due to career obligations.  For this reason they were raised by maids and nannies, whose deferential treatment led to them both growing up with little discipline and not understanding the word “no”.

Current Best Friend: What are best friends? Don’t know ’em- everyone is a disappointment

While he’s procrastinating on completing his work projects, Sacha likes to listen to/play music, hang out at dive bars, and visit parks for fresh air.

After taking multiple years of piano lessons as a child, Sacha has a surprising talent and appreciation for music- which many people don’t know about!  He is notorious for waiting until the last minute to complete his work assignments, which results in him cramming a week of work into a three-day marathon coding session (often skipping sleep and working through the night with power naps).  This unhealthy work schedule does give him time to frequent the local dive bars in the evening, maybe more than he should, and unwind after over stressing himself.  When he’s actually up in the daytime, he likes to be around plants and nature to get some of that sweet sweet oxygen right from the source :^D.