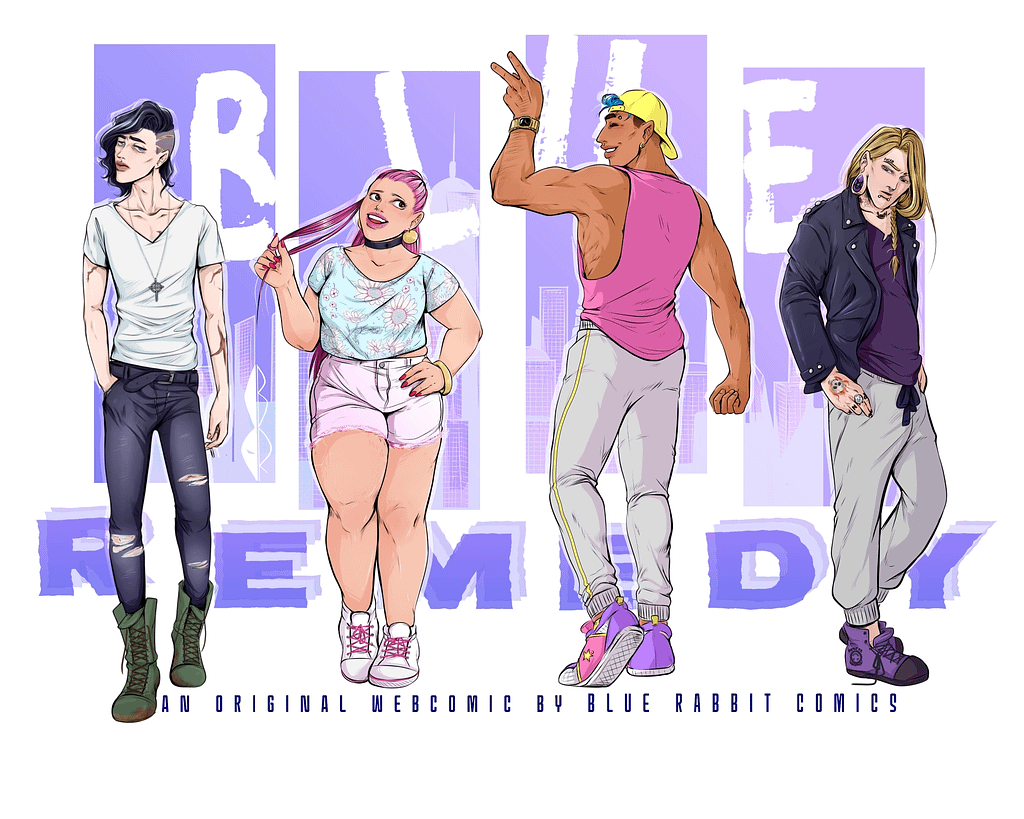 If you have heard of Blue Remedy already- you’re a winner!  If you haven’t…where have you BEEN?

Blue Remedy an original webcomic is my first self-publishing project, and it has taken on a life of it’s own!  I started dreaming up this idea waaaaay back in high school.  At the time it was very different, with a lot of difference in the characters as well.  As time went on and I grew up, so did the story.  Let me tell you a little more about it!  Character introductions will be posted every Sunday in April, so make sure to turn your notifications ON!

Blue Remedy takes place in a metropolis called The City (based off New York City, USA).  It predominantly follows the lives of Nick and Friday, adult best friends and roommates (with some offshoots with other characters of importance).  I would characterize this story as a Drama/ Slice of Life with some fantasy elements and BL/ LGBTQ experiences within.  It is intended to look at the dark and gritty parts of the human condition, delving into many triggering topics and taboos.  There is plenty of comedic relief, romances (that thrive and some that bomb), building friendships, and other happier points as well.  Just like real life, it has its ups and downs…and I am so psyched to share them all with you!

The world that these characters inhabit is exactly like ours, I’ve just named the localities differently.  For example. Colombia is still Colombia, England is still England, and the US is still the US.  But instead of different states, I refer to places as cities, and reference state and city nicknames.  For example, instead of New York City- they live in The City (a nickname given by those who live in the area), New Jersey is Garden City, Las Vegas is Sin City, Connecticut is Nutmeg City…etc etc!  Yes, it is an over simplification- but I don’t care :^) It’s my story and I’m sticking to it!  Knowing the logic behind the names is not that important, but if you are from the area it can be fun to find the little “easter eggs” referencing real places :^)

This story skirts on the edge of what can be scientifically proven and the beliefs of different cultures and peoples.  Straddling this fence is incredibly exciting as a writer, and also lends to easy story telling.  Most of the traditions, taboos, superstitions, etc presented in the story are already known by most of the audience- meaning I don’t have to spend a lot of time fleshing them out.

I started this project waaaaaaay back in high school.  It started off very differently though.

Nick is one of my earliest OCs, created in my junior year of high school.  Shortly after him came Ian (he had a different name then).  I put them together in a story that took place in a college town in Spain, but then came the name – Blue Remedy.  I was in an advanced English composition class back then, and I was advised to write about what you know…so I wrote about starting college, and what I thought that would be like and the struggles of leaving home.  I was drawing it traditionally, and I got a good 20 ish pages in before I stopped because I got too busy with school and work.

As I matured, so did the story.  What I know now is very different than what I knew back then, so I aged up my characters and made some new ones!  Nick and Ian got a revamp (and in Ian’s case, a new name), and the location of the story changed to The City (I have visited New York City on a few occasions, and have lived in other large cities in the past…so that was one of those “write what you know” situations).

To make the story deeper, I started adding more reoccurring characters based on people I actually knew- starting with Friday!  Since Ian was no longer cast as one of Nicks best buddies, he needed a new BFF.  Friday is based on my real life best friend, who was there since the start of the project way back when!  After Friday came a slew of secondary characters- Dante and Lisa included!  One of the newest mains is Sacha, who I based off a mix of my husband and my brother.  They are both Aries men and are similar in a lot of ways- but also different, since of course my partner treats me differently than my brother would…it helped me to flesh out Sacha’s behaviors to approach him from different angles,

One of the aspects I love about making my characters is that they are based on real people.  It helps me to really develop their good and bad traits without bias, and add some quirky facts about them that I may not have otherwise thought up.  Of course I do mix it up sometimes.  For example, Nick is based off me- but he also loves sweets, which comes from my partner.  Sacha is based off my partner, but he is heavily tattooed and pierced- which is something I enjoy.  Friday, though based on my best friend, hates tomatoes like I do.  Get what I mean? ;^)

Don’t miss out another minute!  Start reading right away!